A man leaves his fiancée in the night fog and is never seen alive again. A woman escapes mob life for Norfolk, England, only to find notes in the garden in the secret code of her mobster suitor. The final message is “[p]repare to meet thy God.” A maid, torn from her bed by the butler who spurned her, is brought on a midnight hunt for a long-hidden treasure. As the man drops into the treasure chamber, the seal is lowered, and she leaves him to suffocate.
Sherlock Holmes has become known as one of the most complex, accessible characters in historical and modern literature. You’ll see every subject under the sun—forensics, philosophy, cooking, analytical thinking, and, of course, London—reconsidered through the lens of Sherlock Holmes. The female characters in his world are faced with unique situations. The answers they often find involve this aloof person who is repeatedly deemed sexist by modern writers. Holmes’ fictional biographer, John Watson, reports in one adventure that Holmes has an aversion to women.
Is this consistently true? As for the women, coming into his world can be lifesaving or hazardous.So it’s long since time to apply a different lens to the women who engage and motivate Sherlock Holmes. The center of each essay is agency—the opportunities for independence and self-determination, which were few and far between in Victorian England—and the particular character’s role in the story. What we find all too often are silences around the women. And yet, women in the stories—clients, villains, victims, and Violets—are pivotal in the world of Sherlock Holmes. 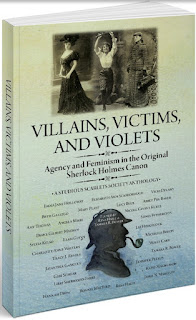 Re-imagined, Lego Sherlock Holmes in his latest adventure - A Baskerville Curse - in A-Z format! Can it possibly get cooler than that?

Yup! The advance reviews are in A-Z format as well! 26 testimonials from Sherlockians all over the world even before the book is released, what are you waiting for?

Here's my review, adding to the heap of praises this wonderful project has already collected:

J is for Jeopardy! Danger lurks, an ancient curse stalks! How will our favourite detective duo - Sherlock Holmes and Dr. Watson - manage??

Some Sherlockians are already aware of this super-cool project and its latest offering and where to buy it - just click on the link and it'll take you to the Kickstarter page for the book: A Baskerville Curse.

Here is an interview with the author himself - if you're still not sold on the idea! (Seriously, this is the cutest avatar of Mr. Holmes ever!)

The e-magazines are up!

Click on the tab above that says "Proceedings of the Pondicherry Lodge" - and you'll find them in all their glory, along with the original release texts they came with. Some links weren't working, so I've replaced those with ones that do.

Or, if you're too lazy or technologically-challenged (I'm both myself) - click here.

At some point (hopefully soon), I do intend to make a proper list that'll just list out the volume and issue for those that don't want to wade through the nonsense to access the e-magazines.
Posted by Dea at 7:44 PM No comments:

From the Tin Dispatch Box